There is a tune stuck in Mafuyu Satou's head. As he clutches the guitar in his hands, this melody swirls around and around, screaming words of regret, longing, and loss. But with his careless expression that always seems to be up in the clouds, no one knows his true feelings. However, a chance encounter with classmate Ritsuka Uenoyama may finally give Mafuyu the push to let his voice be heard.

Uenoyama is the guitarist of a band, whose fellow members include the kindhearted bassist Haruki Nakayama and rough-looking drummer Akihiko Kaji. Even without a vocalist, their ragtag group has done well as an instrumental-only band. However, their chance to reach even greater heights may have arrived when Uenoyama hears Mafuyu's voice—Uenoyama is enchanted, inviting the reluctant Mafuyu to join.

Working in a band is a difficult task; often, emotions threaten to break it apart, but they can also bring its members closer together. With Uenoyama's help, Mafuyu may finally be able to express the feelings that fight to break free from within his heart. 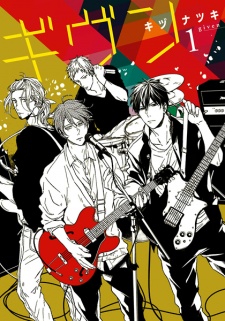